We are very proud to have sponsored Herts Allstars helping them on their journey to the World Cheerleading championships ——— Here is all about the team. 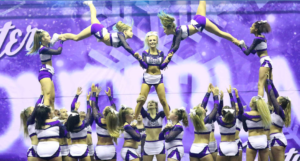 Herts Allstars junior ‘Intensity’ team and senior ‘Re1gn’ teams have successfully secured two team places at The Summit World Cheerleading Championships in America.  The team will be competing throughout the country from Liverpool to Bournemouth before The Summit World Championship in America where the squads will be competing against teams from USA, China, Australia, Japan and the rest of the world.

Last year their junior team ‘Intensity’ were 13that ‘Summit’ the elite Cheerleading World Championships in America which saw 65 squads from all around the world battling out for the supreme title.

Cheerleading is often thought of as girls with pompoms supporting their respective sporting teams, however the reality is far from it.  Cheerleading has been provisionally recognised as an Olympic Sport and will be showcased in the next games.

These elite girls’ squads, who are aged between 10 and 17, are busy preparing for the coming season where teamwork, trust and support will be three fundamental requirements.  The teams will be demonstrate core strength from ‘stunting’ where acrobatic moves are performed by the flyers at the top of the pyramids whilst being supported by their bases lifting them up and supporting their flips and lifts, together with powering every muscle to show off their tumbling skills such as synchronised somersaults.

The club are delighted that James Mossman have agreed to be a sponsor for the teams to help the girls try to realise their dreams.

Say no to plastic!